An edition of: WaterAtlas.orgPresented By: Sarasota County, USF Water Institute

The most easily recognized oyster habitat type is the oyster reef or oyster bar which is constructed of many oysters that continually expand the reef through the reproduction and settling of the oyster larvae. However, oyster reefs are not the only places that oysters grow. In the absence of suitable substrate on which to settle, oyster larvae will settle and grow on various structures such as seawalls, pilings, mangroves, and riprap.

Therefore, habitat types were characterized and coded according to two main elements: structural formation and location. A third element (numbering system) was used to code seawall, riprap, and piling oysters since those types grow in linear bands along or around these structures. The location on the structure and height of the bands is typically determined by the water levels associated with low and high tide. Thus, the bands are exposed at low tide and submerged at high tide.

Oyster reefs are the most prominent; therefore, the most familiar habitat structure. Oysters require a firm substrate upon which to recruit (settle) and certain water quality conditions, such as optimal salinity and water temperature ranges under which they thrive and reproduce. Learn more about oyster reefs » 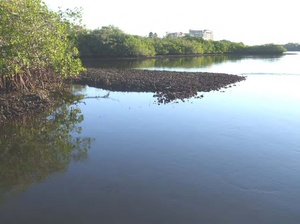 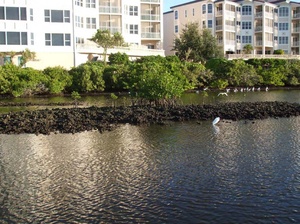 Mangrove aprons, also known as fringe reefs, are reef structures that grow in the substrate and encircle or form an "apron" around the perimeter of mangrove islands. The mangroves are not growing in the reef structure, but in the firm substrate that forms the island.

Mangrove root oysters are oysters that grow on the drop roots of the red mangrove (Rizophora mangle). They may grow singly or in thick clusters or clumps. Learn more about red mangroves » 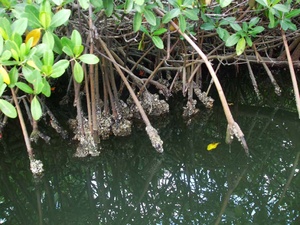 Oysters appear to be highly opportunistic; since the larvae successfully recruit and flourish on manmade structures such as seawalls when suitable bottom substrate is absent. 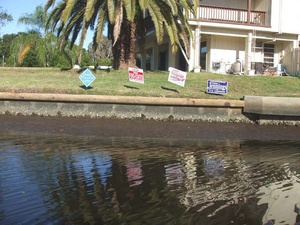 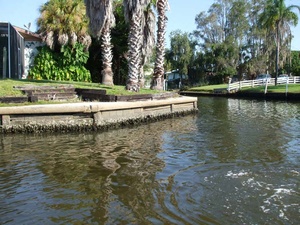 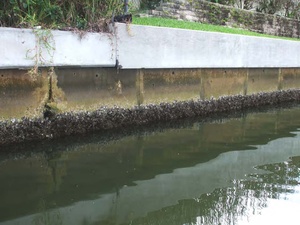 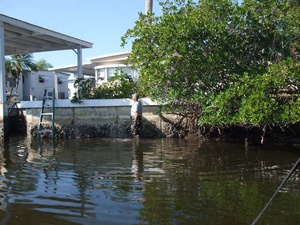 Oyster larvae also recruit on riprap revetments. Larval recruitment and growth did not appear to be as successful as they were on other structures. This is demonstrated by the fact that only Riprap – 1 and Riprap - 2 oysters were found during the mapping process, and many of those were dead. 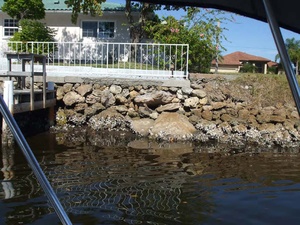 As with seawalls, oyster larvae readily recruit and persist on pilings. 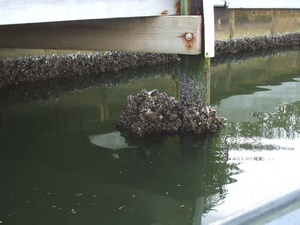 Oyster clumps are clusters of 2 or more oysters that are fixed together. Clumps may be found along natural shorelines, altered shorelines such as seawalls, bulkheads, and riprap, and under docks. The oysters may be a combination of live, recently dead, and dead. Recently dead oysters are when the shells are still articulated (joined together), but no living oyster tissue remains inside. 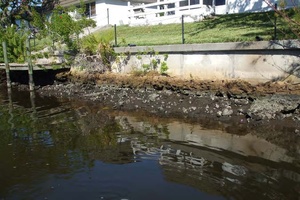 Oyster shell consists of single shells (usually dead) that cover the substrate. It may also consist of shell hash (a mixture of broken shells and sand or mud with gravel) or shell rubble (loose, individual living or dead shells cemented together). These shell types can act as cultch material for oyster recruitment. 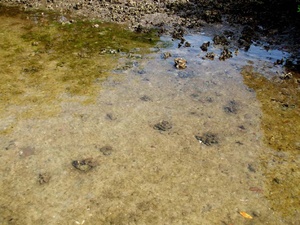